Is it Goodbye, Red Cross? 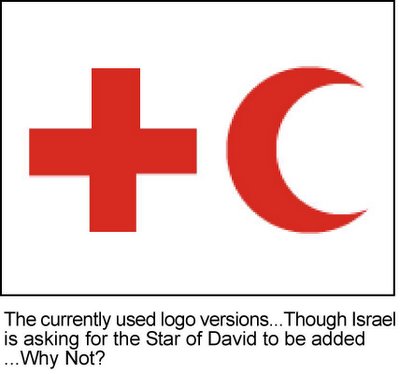 In today’s world of political correctness phobia, the issue of trying not to offend others is reaching higher levels of paranoia...The latest being that concerning the symbol to use for the respected (non-religious) organization that for decades has risked its members in desolate, war or disaster zones around the globe to provide first aid to needy people of all colors or creed. Should they have just one internationally recognized acceptable icon as their logo? Should the logo vary from region to another? If 'yes', what should this icon be?

The argument is interesting, but definitely a thorny one...

In Geneva diplomats from the 192 countries which have signed the Geneva conventions are meeting to discuss a third emblem for the international Red Cross.

Red Cross officials hope approval of a third emblem will finally put an end to decades of controversy over the issue.

At the moment, the only two emblems recognised under the Geneva conventions are the red cross and the red crescent; relief workers and ambulances bearing these symbols are protected under international law.

In war zones or disaster regions, they must be granted free access to people in need of help. 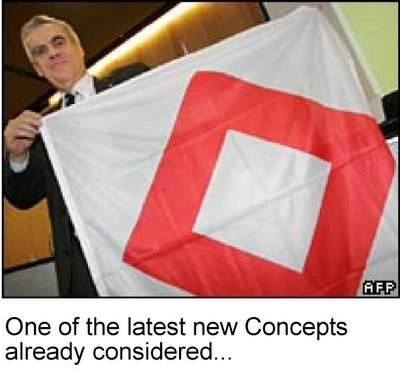 "We're actually trying to get a solution for the Red Cross, but some seem to want us to try to solve the entire Middle East conflict," says a Swiss diplomat

Over the years, a number of countries have applied to have their own distinctive emblems recognised, but all have been refused. Francois Bugnion, director of international law with the International Committee of the Red Cross (ICRC), believes too many emblems could compromise protection.

"They would be identified with different countries, so instead of conveying the message 'this is an ambulance, this is neutral and must be respected', it would be a sign of identification which would run against the objective of the protective symbol."

One country in particular, however, refuses to use either the red cross or the red crescent.

Israel's Magen David Adom Society (MDA) uses the unrecognised red star of David as its emblem. As a result, the society is still not a member of the international Red Cross movement, something which many Israelis see as unjust.

Israel's ambassador to the UN in Geneva, Itzhak Levanon, shares that opinion.

At present, only two emblems are officially recognised

"MDA is active all over the world," he points out. "In the tsunami, for example, or following earthquakes, we are often first on the scene, and we deserve to be part of the international movement."

The problem is, the star of David is primarily Israel's national symbol, rather than an emblem of humanitarian relief.

Arab states have made it clear they will never accept the red star being recognised under the Geneva Conventions.

At the same time, the conventions stipulate that national relief societies must use only recognised symbols outside their internationally accepted borders.

That means Israel should probably not be using the red star in the occupied territories.

The wrangling over the issue has gone on for decades, and it is proving costly for the International Red Cross.

For the last five years, the American Red Cross has withheld its subscriptions to the international movement in protest at Israel's exclusion, creating a shortfall of over $30m.

The only solution seems to be a third emblem, and Red Cross officials have come up with a design they hope will please everyone.

To be known as the red crystal, it is a red diamond shape on a white background.

Israel has said it is ready to use it outside its borders, and, after some intense negotiations, the MDA and the Palestinian Red Crescent signed an agreement on working together in the occupied territories.

On the surface then, everything looked promising for the approval of the new emblem.

Switzerland, as the repository state for the Geneva Conventions, sent out the invitations for the conference, and Swiss diplomats, who played a key role in getting the agreement between the MDA and the Palestinian Red Crescent, were initially very optimistic.

But there is one issue which might get in the way - many Arab countries already see the third emblem as an unnecessary accommodation of Israel.

Now that the MDA has agreed to work with the Palestinian Red Crescent in the occupied territories, some are suggesting that a similar agreement is necessary for the Golan heights.

Since this is also disputed territory, surely, they say, the Syrian Red Crescent should have a role there?

"We have no diplomatic relations with Syria, the issue is simply not in the debate. But I'm not excluding that some Arab countries will try to raise it, and if they do, the losers will be the Palestinians," he says.

In the last few days, Geneva, normally a tranquil city, has seen a flurry of diplomatic activity, as officials try to reach a last-minute agreement.

Masood Khan, as ambassador for Pakistan, is negotiating on behalf of the 56 countries belonging to the Organisation of the Islamic Conference.

"All sides are making honest endeavours to reach agreement. We must create the right kind of environment where we have an understanding between the Israeli and Syrian national societies, because of the question of occupied Golan and whether the Syrian Red Crescent can operate there."

For the Swiss, who have spent months working towards the conference, and whose foreign minister has made several trips to the Middle East and Israel in the last few weeks, this last-minute hitch is causing great anxiety.

"It's frustrating," said one diplomat who asked to remain anonymous.

"We're actually trying to get a solution for the Red Cross, but some seem to want us to try to solve the entire Middle East conflict."

Nevertheless, most diplomats agree that there is, if not consensus, then at least a majority in favour of the red crystal.

And some do also see the agreement between the MDA and the Palestinian Red Crescent as a small but hopeful step towards better relations in the Middle East.

And, if the red crystal is approved, it could have big implications for the Red Cross movement.

Any country wishing a more neutral emblem will be able to adopt it and it is thought a number of countries with mixed religious populations may do so in the long term.

That would mean that the world's best known humanitarian movement, whose original emblem was simply a reversal of the Swiss flag, would start to look rather different.