The Softer Side of the Dictator 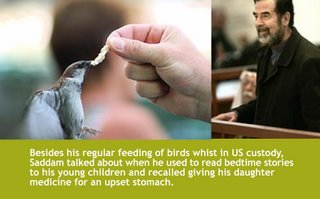 When Sgt Ellis left, Saddam Hussein said he would be his brother Saddam Hussein watered weeds in a jail garden and drank coffee while smoking cigars to keep his blood pressure down, a US army nurse who cared for him says.

In an interview with a US newspaper, Master Sgt Robert Ellis provided a rare glimpse into the last years of Saddam Hussein, who was executed on Saturday. Sgt Ellis looked after the former Iraqi leader - whom they called 'Victor' - in 2004 and 2005 at a camp near Baghdad.

The prisoner rarely complained during his time in captivity, he said. He added that he was under strict orders to do whatever neccessary to keep Saddam alive. "Saddam Hussein cannot die in US custody," he said a US colonel had told him.

Sgt Ellis, from St Louis, told the St Louis Post-Dispatch that Saddam Hussein was held in a six foot by eight foot (1.8m to 2.4m) cell with a cot, table, two plastic chairs and two wash basins. When he was allowed to go outside, Saddam Hussein saved bread scraps from his meals to feed to the birds, Sgt Ellis said.

The former leader also watered a patch of weeds. "He said he was a farmer when he was young and he never forgot where he came from," Sgt Ellis said.

He said Saddam Hussein never gave him trouble and complained little. "He had very good coping skills," Sgt Ellis said. Saddam talked about when he used to read bedtime stories to his young children and recalled giving his daughter medicine for an upset stomach.

His sons Uday and Qusay were killed by US troops in 2003. The former leader did not talk about dying and had no regrets about his regime, saying what he did was for Iraq. Sgt Ellis said Saddam Hussein once asked him why the US had invaded when "the laws in Iraq were fair and the weapons inspectors didn't find anything".

Sgt Ellis, 56, checked on Saddam Hussein - or Victor as he was referred to in military code - twice a day. "I posed no threat. In fact, I was there to help him, and he respected that," Sgt Ellis said.

When the nurse had to leave because his brother was dying, Saddam Hussein hugged him and said he would be his brother.

The former president, 69, was sentenced to death by an Iraqi court on 5 November over the killings of 148 Shias from the town of Dujail in the 1980s.