Abortion. Bitter Pill to Swallow as Malta slowly walks out of its Medieval Cavern... 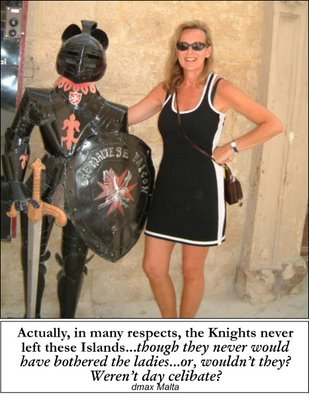 It is sad that Malta, a supposedly Christian haven is so stubborn at accepting that democracy means pluralism of ideas, opinion and, yes, even of religious believes.

In other European countries pluralism of religions means also divergence in what one may define as 'conscience' and what dictates one's dogmas, the 'do's' and 'don'ts' in life.

If a Maltese lady walks in a Teheran avenue in a mini skirt, she may be arrested for improper attire. A Muslim lady with her zealous outfit covering her face and entire body may be looked upon in Malta with curiosity, if not ridicule.

It shows that when it comes to multicultural comprehension and respect, though us Maltese can rank high amongst those who are quick to patronize others on how they ought to behave, talk, protest, live their lives, respect their women, etc. we have still a long way to go to set our own record straight.

No wonder this week's announcement that a Spanish doctor will be offering 'free abortions' to Maltese ladies (read more: http://www.maltastar.com/pages/msfullart.asp?an=4559) came as a shock to most.

But being part of the European Union means growing up, not just brandishing our democratic 'free world' credentials to suit only our economic ambitions. Life is not just about money.

Life is also about other freedoms. Disputes related to freedom of conscience are nothing new in Malta. Throughout its recent history, from the arrival of the Knights of St. John in 1530 onwards, these islands have been programmed to accept just one vision in life: The Catholic one. Others were quite literally 'aborted' (no pun intended!).

Wrong or right, the Catholic vision of life is not the only vision in this globalized world. Having different perspectives to life and its basics does not necessarily make you a criminal. That is, of course, if whoever makes civil laws is not held at ransom by the moral or religious authorities of the country.

That might explain why divorce is still a no-go area to politicians in Malta, as they fear retribution from the 'all mighty' Catholic Church.

The Spanish doctor, who is free to talk the way he did all over Europe, may risk prison in Malta. Most would just say, 'bloody right' about that...And I am not surprised. We are the very people who send ship loads of clothes and food stuffs to people in distress to (face-less) Tsunami victims in Asia, but then make the life of hapless poor African boat people that are unfortunate enough to land on our shores harder by making them feel totally unwelcome. Charity begins at home, no?

Actually, in many respects, I sometimes think that the Knights never left these Islands...though they never would have bothered the ladies...or, wouldn’t they?
They were celibate, no?

Your opinions are welcome. Ray de Bono for Dmax Malta.