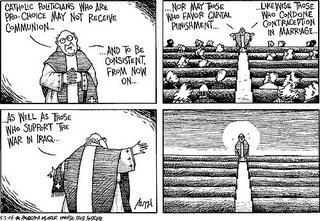 PRAISING A CATHOLIC DICTATOR. Was he what Europe Needs today?
General Franco: Catholic conqueror of communism

It's not often you hear a paean of praise to the Spanish fascist dictator General Franco these days. Even Catholic Church in Malta is said to have considered him a real hero as fighter of Communism, and it was not alone its support. One certainly doesn’t expect to hear such support in the European Parliament.

So members were shocked when Polish MEP Maciej Giertych got to his feet. He was speaking in one of those debates that seem rather pious and pointless, to mark the 70th anniversary of the beginning of the Spanish civil war - full of MEPs condemning a regime that is long dead and buried, already reviled by most.

Now Mr Giertych is not some marginal figure. He was a presidential candidate and his party is a coalition partner in the Polish government. His son doubles as deputy prime minister and education minister.

This is what Giertych senior said: "Thanks to the Spanish army and Franco the communist attack on Catholic Spain was thwarted. The presence of such people in European politics as Franco guaranteed the maintenance of traditional values in Europe and we lack such statesmen today. Christian Europe is losing against atheistic socialists today and this has to change."

He says today's assumptions are "historical revision". How do you think the history of Europe would have been different if the elected socialist government and their communist allies had won in Spain?

Coincidentally, besides the Catholic Church, Nazi Germany was a material supporter of Franco's fight against the Communists contributing in terms of military training, equipment, and political pressure in the 1930’s.

Article adopted and modified by Dmax from: BBC Online