From Patriotism to Common Sense 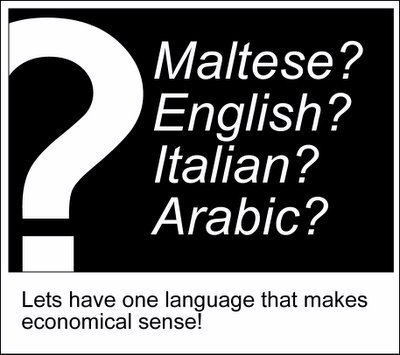 The fall and fall of English in Malta
by Lino Bugeja
The Times of Malta of Thursday, January 12, 2006

The fall and fall of English in Malta
Lino Bugeja

About a decade ago I made a solemn vow that I would never write again about the state of the English language in the Maltese islands... and from time to time I feel compelled to break this holy pledge and reiterate my views on the subject.

This change of heart has been prompted by the recent spate of letters in The Times which may somehow put the brakes on the teaching of English in order to reserve more time for the Maltese language. And this at a time when this universal language is growing bigger everyday thanks to the internet and the hard fact that the internet (of which a I am a novice) is overwhelmingly an English language medium, an estimated 85 per cent of its pages being in English. The language has conquered the net and presently e-English rules the waves.

Undoubtedly, this contribution will open a Pandora's box. The forces of blind nationalism will unleash their missiles with unabated fury. But even at the risk of being pilloried as an anachronistic anglophile, I am prepared to stick my neck out on the national chopping block in order to expose a glaring hypocrisy of double standards or, at best, misplaced nationalism in our educational institutions.

Recently a group of intellectuals, most of them well-placed and highly privileged in Maltese society, has been consistently pontificating to the nation's children, other than their own, on the importance of our native language as a means of national identity. Imperceptibly, these academics, in their nationalistic zeal, are trying to wean the less privileged children mainly in state schools away from the Language of the Oracle while for their offspring an English-speaking environment is taken for granted. Cocooned in the full knowledge of a lucrative future, these academics can afford to live in proud cuckoo-land while lesser mortals have to toil incessantly in a labour market where the English language is of the essence.

Let me honestly state from the outset that my impassioned plea for an improvement in the standard of English does not stem from any nostalgic harking to colonial days but mainly from a genuine realisation of the importance of English as a vehicle of economic, technical, cultural and educational import. It is the degree of necessity that gives meaning to the term "English as a second language" in contrast to the more leisurely approach to "English as a foreign language". In the local situation the English language is an absolute necessity, the gateway to knowledge, the way ahead in technology, in the economic aspect highlighted recently by a government minister when commenting on the Freeport stressing that "Malta has the edge over the Italians because of its English-speaking workforce". This statement epitomises the importance of English as a vehicle of economic growth.

This misguided campaign, deliberately intended to relegate the status of English in the state schools and in the ranks of the civil service, emanates not so much from a national outcry as from an unrealistic idealism resulting in a wide chasm in the standard of English between the majority of the Church/private schools and those run by the state. Suffice it to say that in the late 1980s a "diktat" by the Ministry of Education discouraged children from being exposed to English in the first three years of schooling.

Maltese is undoubtedly an integral part of our national heritage; it deserves special attention and should be given due recognition in all schools. The educational institutions of my generation in post-war Malta fostered in us a deep love for the Maltese language and literature. Many of us harboured genuine love for our mother tongue. However, a sense of balance, tempered by a sense of responsibility, was always paramount in my school days and the English language never lost its importance in the time-table. I have no quarrel with those who advocate the teaching of Maltese in our schools. What is unacceptable is its undue emphasis in the Junior Lyceum entrance exam, making the curriculum in state schools heavily biased in favour of the Maltese language. In countries where English is a second language there is more weighting in favour of English in selective examinations for secondary and tertiary education.

In this regard the predominance of English over the mother tongue is dictated by the fact that research possibilities in the vernacular are sadly very limited. Sadly, these selective exams drag along with them the entire minimum curriculum into a blind alley. Personally, I have seen timetables in the state primary sector where English was relegated to a period of 45 minutes in early afternoon.

Over the last few decades English has ceased to be the medium of instruction in most of the state secondary schools. The Maltese language was adopted in the mistaken belief that this approach is more conducive to a mature form of cultural identity. The preference of Maltese over English is very evident even at the university where more and more dissertations are submitted in Maltese even in areas where academic research has to be conducted in English. It is also not uncommon for students to ask lecturers to deliver their lecture in the vernacular even in subjects where the subject and terminology dictate otherwise.

Unlike pre-war days, post-independent Malta, a member of the European Union (where English has emerged as the most popular language for school children in all the member states), has no anglophile promoters in the political arena. It pays to play the national tune and pander to the pseudo-national fervour to downgrade the language of the ex-colonial masters. Regrettably, it is political dynamite for any politician to articulate, even discreetly, the absolute need of the English language, the language of international currency whose global power through the internet advances more ruthlessly than the British Empire ever could.

Mr Bugeja was a Commonwealth scholar and studied comparative education at Moray House College in Scotland.