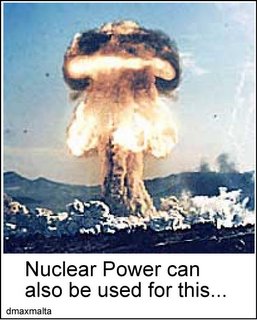 
We all say that we love peace and refuse to accept war as sometimes an unavoidable solution to guarantee life on earth...But the events evolving in Iran are scary...And if the matter is not sorted out diplomatically (as we all hope it is) one can foresee a possible mayhem in this already turbulent region of the Middle East. Our sympathy goes to the millions of law abiding people that live in the area, but with the military intimidation and wild statements repeatedly being made by the Iranian President one is reasonably inclined to be concerned about what is happening next.

Many claim this Islamic Republic ought to be granted the 'right' to adopt nuclear power for peaceful purposes...Others insist Iran cannot be trusted in view of its historic links to terrorists...

We should keep our fingers crossed and as we worry about the infiltration of Avian Flu in Europe, the rising cost of oil and the growing tide of illegal migrants from Africa we ponder a bit about the emerging nuclear peril that engulfs us all as time goes by.

Iran has removed seals from a nuclear facility and will begin research there in the coming hours, the UN nuclear watchdog the IAEA has confirmed.
The move ends a two-year suspension of research, and could result in Tehran being referred to the UN Security Council for possible sanctions.

Western countries fear Iran's nuclear programme could be used to make atomic bombs, but Tehran denies such a goal.

It says the project is for the peaceful production of energy only.

Talks between Iran and the EU trio of Germany, France and the UK broke off last August after Iran resumed uranium conversion activity which it had suspended in 2004.

The resumption of research on Tuesday at the Natanz site suggests all of Iran's nuclear activities, apart from uranium enrichment - a key stage in making a nuclear bomb - have been revived.