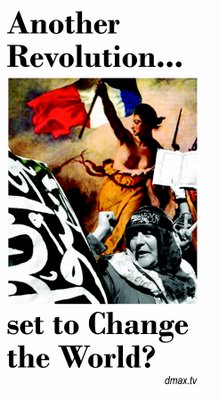 I felt it was good to see what possibly could have been the real factors behind this mayhem in Paris. It is worrying considering the growing number of muslims in the EU that such events are taking place in this day and age. We need to identify the motivation of these riots, whether or not they are coming from a genuine desire by these people to integrate in French society, or if its part of a wider political or Islamist agenda....I question the cause behind the plight of these angry young men... Is it just poverty? Are they being used? Instigated?


Days of rioting in the bleaker suburbs of Paris have highlighted discontent among many French youths of North African origin.

As part of a series on French Muslims, the BBC News website's Henri Astier looks at the issue of discrimination, a leading source of frustration in France's unemployment-riddled ghettos.


Sadek recently quit his job delivering groceries near Saint-Denis, just north of Paris. He was tired of climbing stairs with heavy bags.


Unemployment is high in estates which are home to many Muslims

Sadek, 31, has a secondary school education and aspires to something better. But he knows his options are limited: "With a name like mine, I can't have a sales job."

Telemarketing could be a possibility - his Arab roots safely hidden from view. Of course, he would have to work under an assumed name.

Sadek's story sums up the job prospects of the children and grandchildren of Muslim immigrants.

They may be French on paper - but they know that Ali and Rachid are much less likely to get ahead than Alain or Richard.

Racial discrimination is banned in France. But a quick look at the people working in any shop or office suggests the practice is widespread.

The impression is confirmed by official statistics.

Unemployment among people of French origin is 9.2%. Among those of foreign origin, the figure is 14% - even after adjusting for educational qualifications.

It says such discrimination is particularly rife in the retail and hospitality industries - but also for jobs involving no contact with the public.

"Some companies believe that to be responsible for marketing you must have roots in mainland France over several generations to understand the French consumer attitudes," according to a recent SOS Racisme report.

"Doors are closed when you are an Arab," says Yazid Sabeg, a businessman and writer.

For many young people, the first time they notice the closed door is when they try to go clubbing.

"The first time the guy at the entrance says: 'You're not coming in', you accept it," says Nadir Dendoune, a journalist from Saint-Denis.

"But after two or three times, you go home carrying a bag of hatred on your shoulders."

And when you can't find a job, Mr Dendoune adds, despondency turns to paranoia.

"Every rejection - even those that may not be racially motivated - undermines your self-confidence. You feel you will never make it because you are Arab."

France has countless bodies dedicated to helping immigrants - a High Council for Integration, a Directorate for Populations and Migrations, several regional commissions for the insertion of immigrants, and so on.

Despite this, France's integration policy has failed, the Court of Accounts, a government watchdog, concluded last year.

The situation could lead to "serious social and racial tensions", the court warned prophetically.

According to some, the concept of "integration" itself is flawed.

"People always talk of the need to 'integrate' Muslims. But the youths are French. Why should they need integrating?" asks Samia Amara, 23, a youth worker near Paris.

Mr Sabeg agrees that "integration" is just hot air. "What does it mean? Are some French people supposed to integrate and others to be integrated?"

Some politicians argue that France should admit this failure and try something new.

Manuel Valls, an MP and mayor of Evry, a town south of Paris where half the population have foreign roots, says France "cannot lecture Britain or the US" on immigration issues.

His country, he points out, has no black or Arab TV presenters, and all MPs from mainland France are white.

Mr Valls is a firm believer in "positive discrimination" - a very un-French concept that is beginning to gain acceptance.

The broad idea is extra help based on geographical and social - but not racial - criteria. Mr Valls points to an example of such action in his own constituency.

The Lycee Robert Doisneau is a secondary school surrounded by some of the country's worst housing estates, with unemployment in excess of 30%.


The Lycee Robert Doisneau offers students a shot at success
About 70% of pupils have foreign parents or grandparents.

Despite such a challenging intake, the school offers a way out of the ghetto.

She has pioneered partnerships with elite schools, whose high-fliers groom local pupils to develop their aspirations.

The result is 89% success in school leaving exams - well above the national average - and a record of success at university level for former students.

Of course, youths from poor suburbs need more than an education - they need jobs.

Efforts are being made to encourage employers to take them on. Unlike the failed legislative approach, the emphasis is now on voluntary pledges by employers.

Mr Sabeg is among the sponsors of a new "diversity charter" encouraging companies to "reflect the diversity of French society" by hiring qualified non-whites.

It remains to be seen how this will be implemented.

Mr Sabeg is looking across the Channel for inspiration, noting that the head of Vodafone, one of Europe's largest companies, is an Indian, Arun Sarin.

"When this happens here, we will know France has changed," he says.

Meanwhile in Saint-Denis, Sadek would settle for a temp job at the post office - but that remains a distant dream.

Anonymous said…
Oh, how knowledgable these Muslims are. And I ask myself...if all these professional, graduated, high standard Muslims be deported to their origins, i.e. Arab Countries, I would say that the Arab economy will experience a boom, with all that knowledge. Arab countries didn't succeed, in the first place because of a brain drain i.e. professionals leave the country (in their case - the continent) to find a better job with better pays around the world. But one must say that, the African Continent have the most valuable resources, be it human resources or Oil, so they can invest in creating factories and other businesses. Arabs and Indians managed to infiltrate high positions in European business levels and succeeded. So imagine if these have their businesses in their home country, with all the graduates and professionals, they would succeed even more. We will have another Chinese-boom-economy in Africa. Arabs around the world have the same fame, lazy and criminals. Is this a Kumbinazzjoni jew??? So let the process of Muslim deportation to their original countries set the rules of the game.
2:13 AM PST