What did we fight for, Mr Bush? 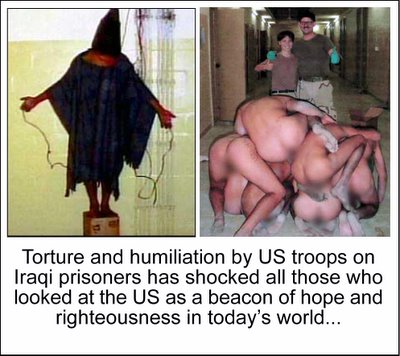 
Human rights abuses in Iraq are now as bad as they were under Saddam Hussein and are even in danger of eclipsing his record, according to the country's first Prime Minister after the fall of Saddam's regime.

'People are doing the same as [in] Saddam's time and worse,' Ayad Allawi told The Observer. 'It is an appropriate comparison. People are remembering the days of Saddam. These were the precise reasons that we fought Saddam and now we are seeing the same things.'

In a damning and wide-ranging indictment of Iraq's escalating human rights catastrophe, Allawi accused fellow Shias in the government of being responsible for death squads and secret torture centres. The brutality of elements in the new security forces rivals that of Saddam's secret police, he said.

Allawi, who was a strong ally of the US-led coalition forces and was prime minister until this April, made his remarks as further hints emerged yesterday that President George Bush is planning to withdraw up to 40,000 US troops from the country next year, when Iraqi forces will be capable of taking over.

Allawi's bleak assessment is likely to undermine any attempt to suggest that conditions in Iraq are markedly improving.

'We are hearing about secret police, secret bunkers where people are being interrogated,' he added. 'A lot of Iraqis are being tortured or killed in the course of interrogations. We are even witnessing Sharia courts based on Islamic law that are trying people and executing them.'

He said that immediate action was needed to dismantle militias that continue to operate with impunity. If nothing is done, 'the disease infecting [the Ministry of the Interior] will become contagious and spread to all ministries and structures of Iraq's government', he said.

In a chilling warning to the West over the danger of leaving behind a disintegrating Iraq, Allawi added: 'Iraq is the centrepiece of this region. If things go wrong, neither Europe nor the US will be safe.'

His uncompromising comments came on the eve of Saddam's latest court appearance on charges of crimes against humanity. They seem certain to fuel the growing sense of crisis over Iraq, both in the country itself and in the US, where political support for the occupation continues to plummet.

Allawi was selected to serve as prime minister of the first interim government, before last January's first national elections. Admired in both Downing Street and the White House as a non-sectarian politician committed to strong centralised government representing all Iraqis, Allawi's supporters struggled in last January's elections, where they were eclipsed by Shia religious parties, some of which have been implicated in the violence.

Recently, however, his reputation has enjoyed a resurgence as he has tried to build alliances with Sunni political groups ahead of next month's national elections.

His comments come as a blow to those hoping that Iraq was moving towards normalisation under the new government. In a speech on Wednesday, Bush is expected to hail the improved readiness of Iraqi troops, which he has identified as the key condition for withdrawing US forces.

But the proximity of the latest round of elections appears to have only intensified political murders and intimidations, including members of Allawi's own list, who have been killed and attacked by political rivals.

Despite denials of wrongdoing by the Ministry of the Interior, which has been implicated in much of the abuse, a series of damaging disclosures, including the discovery of a secret detention centre run by the ministry, has heaped embarrassment on the Iraqi government and its foreign supporters.

The intervention by one of Iraq's most prominent political figures promises to turn human rights abuses into a key election issue.

Allawi's scathing assessment of the collapse of human rights in Iraq under the country's first democratically elected government came amid an angry denunciation of the involvement of the Iraq government's institutions in widespread disappearances, torture and assassinations.

He added that he now had so little faith in the rule of law that he had instructed his own bodyguards to fire on any police car that attempted to approach his headquarters without prior notice, following the implication of police units in many of the abuses.

Responding to the former prime minister's comments, Sir Menzies Campbell, the Lib Dem foreign affairs spokesman, said: 'It is inconceivable in the higher reaches of the command of the multinational forces that there was not an awareness of what is being done by some Iraqis to their own countrymen.

'The assertions by Mr Allawi simply underline the catastrophic failure to have a proper strategy in place for the post-war period in Iraq.'