Can Turkey ever by Ready? 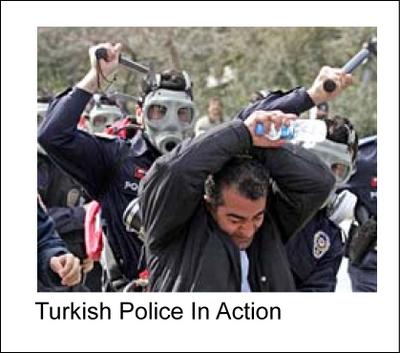 The European Union has started negotiations with Turkey...Opening the way for full membership...

Journalists have raised concerns about aspects of the penal reforms
A journalist in Turkey has been found guilty of insulting Turkish identity and given a suspended six-month jail sentence by a court in Istanbul.
Hrant Dink, of Armenian-Turkish descent, wrote a newspaper column which he argued was aimed at improving relations between Turkey and Armenia.

The prosecution interpreted one part as an insult, but Mr Dink has said he will appeal against the ruling.

The verdict follows criminal code reforms as Turkey seeks to join the EU.

The reforms were intended to improve freedom of speech in Turkey.

The article written by Mr Dink addressed the killings of hundreds of thousands of Armenians during Ottoman rule in 1917.

Armenians, supported by several countries, want Turkey to recognise the events as a genocide. Turkey rejects that description, saying the deaths occurred in a civil war in which many Turks were also killed.

A paragraph in the article calling on Armenians to symbolically reject "the adulterated part of their Turkish blood" was taken as offensive.

He is the editor of a bilingual Armenian-Turkish newspaper, Agos.

The BBC's Sarah Rainsford said the judge ordered a suspended sentence as it was Mr Dink's first offence.

But the nationalist lawyers who brought the case were disappointed.

"There was an obvious humiliation and result of this case should be at least two and a half years or three years criminal charge," one said.

"But I think that Turkish courts are under big pressure due to these European Union accession talks."

"There was no crime here," she told the BBC. "We expected our client to get off."

Mr Dink says he will appeal against the ruling. But if he cannot clear his name, he will leave the country.

"If I'm guilty of insulting a nation," he told the BBC, "then it's a matter of honour not to live here."