Shape of things to Come... 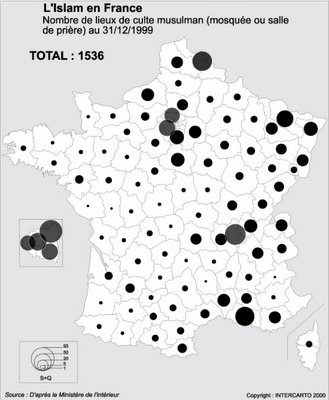 
Many immigrants (mostly Muslim) are living in squalid conditions in France. This is bad. Some of them are becoming increasingly edgy as their calls for help remain unheeded and are making their voice heard, in many ways...


Many cars have been gutted by fire during the riots ...Mosques surrounded by the police...

Violence has flared for a fourth night in a north-east Paris suburb, but not on the same scale as before.

Six policemen were injured and 11 people arrested in the latest confrontations between angry youths and police in Clichy-sous-Bois.

Police said one or more teargas canisters were hurled into a mosque from an unidentified source.

Interior Minister Nicolas Sarkozy is to meet the parents of two teenagers whose deaths sparked the riots.

Saturday saw hundreds of mourners pay homage to the teenagers by holding a peaceful procession in Clichy-sous-Bois, which has a large immigrant population.

The authorities denied rumours that policemen were chasing the two boys who were electrocuted on Thursday after entering an electricity sub-station.

An official investigation into the boys' deaths is under way.


A third young man is seriously ill in hospital.


The BBC's Alasdair Sandford in Paris says many in the suburb do not believe the authorities' account that the two boys were not being chased by police.

Mr Sarkozy has promised to send special police units into difficult suburbs around France to stamp out violence.

But local people in Clichy accuse him of heightening the tensions with inflammatory language.

During Saturday's march in memory of the dead teenagers, there were calls for the government to tackle discrimination against immigrant communities such as theirs.