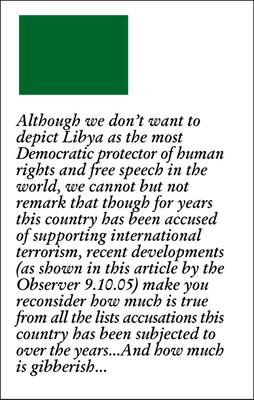 What are we to believe? What are we to stand up for? Is truth a make-belief game that the powerful play on the weak? Are we all dumbo's bred to accept the news as biblical facts?
Ray 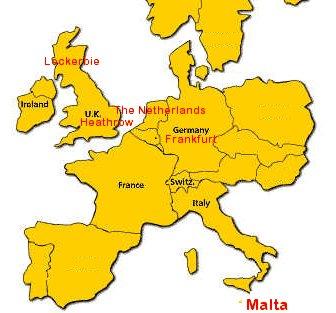 After all the hassle the Libyan accused of the Lockerbie bombimg may end up potentially a fre man...


Dramatic new evidence of forensic errors could see the man accused of planting the Lockerbie bomb win a new appeal against his conviction, The Observer has learned. Lawyers acting on behalf of Abdelbaset Ali Mohmed al-Megrahi are said to have uncovered anomalies suggesting vital evidence used to convict their client came from tests conducted months after the terror attack.
Pan-Am Flight 103 blew up over Lockerbie on 21 December 1988, when about half a kilo of plastic explosive was detonated in a cargo hold, killing 270 people including 11 on the ground.

Megrahi, a Libyan intelligence officer and head of security for Libyan Arab Airlines, was convicted in January 2001 and sentenced to 27 years in jail after a three-year joint investigation by the Dumfries and Galloway Constabulary and the FBI. His co-accused, al-Amin Khalifa Fhimah, was cleared.

Fingertip searches of the crash site found fragments of a Samsonite suitcase and parts of a Toshiba radio cassette player as well as several pieces of clothing covered in explosive residue. Investigators claimed both the suitcase and clothing were linked to Megrahi. To prove that the bomb was inside the case, investigators set off a series of explosions using an identical suitcase and contents to check how they would be damaged.

Megrahi's lawyers now believe material produced during these tests was mistakenly presented to the court as if it were the original suitcase. One source told The Observer: 'To say that the evidence recovered from the ground at Lockerbie and the material produced during the tests became mixed up would be something of an understatement. They became thoroughly confused.

'It casts serious doubts over the prosecution case because certain items that should have been destroyed if they were in the case containing the bomb are now known to have survived the blast.'

In one instance a charred Babygro was produced as evidence that it had been used to wrap the bomb. However, new evidence has emerged which suggests the garment was completely undamaged when it was found. Instead, a similar Babygro used during the explosive tests was presented to the court.

Megrahi has always denied involvement in the bombing and claims that he was set up so that Libya would take the blame. A key witness against him was the owner of a clothes shop in Malta where the items in the suitcase were allegedly bought. During the verdict, the judges admitted that the owner had failed to make a convincingly positive identification of Megrahi, but said: 'There are situations where a careful witness who will not commit himself beyond saying that there is a close resemblance can be regarded as more reliable and convincing in his identification than a witness who maintains that his identification is 100 per cent certain.'

Megrahi's case is now being examined by the Scottish Criminal Cases Review Commission and his legal team believe that the new evidence is strong enough for him to get a retrial.

The fresh doubts over the forensic evidence are being considered alongside recent claims by an anonymous former Scottish police chief who last month gave Megrahi's lawyers a sworn signed statement claiming that key evidence in the trial was fabricated. The officer said that he had expected Megrahi to be acquitted at the trial or on appeal, but came forward when this did not happen.

After the trial, legal observers from around the world, including senior United Nations officials, expressed disquiet about the verdict. Many believed the true suspects in the case were members of the Syrian-led Popular Front for the Liberation of Palestine General Command (PFLP-GC), a terror group backed by Iranian cash. Documents leaked from the US Defence Intelligence Agency two years after the Libyans were identified as the prime suspects still blamed the PFLP-GC.

Further tests are now set to be conducted to see how the mix-up happened.

Dr Jim Swire, who led the campaign for justice after losing his daughter, Flora, in the bombing, has also expressed doubts over Megrahi's guilt. 'I am aware there have been doubts about how some of the evidence ... came to be presented in court. It is in all our interests that areas of doubt are thoroughly examined.'

The Scottish criminal review is not expected to decide whether to refer Megrahi's case to the appeal court until next year at the earliest.