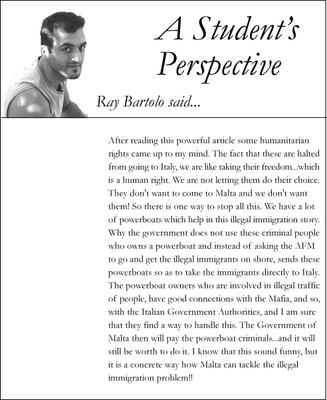 Some reach the island of Malta by mistake, and feel trapped
As you walk the historic streets of the Maltese capital Valletta, there is little sign of the turmoil on the Mediterranean islands.

Tourists mingle with shoppers in the ancient streets laid out in an unusual grid pattern.

In the centre of the tiny city is the building that houses the Malta Emigrants Commission.

From these offices, generations of Maltese migrants prepared to leave and start new lives overseas.

But the main corridor is now packed with young Africans - men, women and children. These are not people who are about to leave Malta, they have just arrived. It is the first sign that everything is changing.

We took to the air in a helicopter to see the scale of the change. As we lifted off it immediately became obvious. Dotted around Malta International Airport are barracks that were abandoned by the British Army when it left.

The buildings are full of newly-arrived immigrants, their washing hanging from the windows. The grounds are packed with military tents housing more of the asylum-seekers. In the first 10 months of 2005, more than 1,500 have come from Africa.

The figures are small when compared to the large numbers arriving in other countries of the European Union, until you consider Malta's population.

Quote: You can't continue, you can't go back, and the Maltese don't want you here
Warsame Ali Garare
Somali migrant

The islands of Malta are small, but full. Almost 400,000 people live there, making it the third most densely-populated country on earth.

The increase of 1,500 is the equivalent of almost a quarter of a million arriving in the United Kingdom in 10 months. That is why the Maltese government is asking for help.

"This is a huge problem by any standards, and if the current influx of illegal immigrants is maintained next year, Malta will find itself in big difficulties and it cannot handle this situation an its own," Brigadier Carmel Vassallo, the head of the armed forces, told me.

The government is asking if some other EU countries cannot help by taking some of the asylum-seekers. Just a few hundred less would make an enormous difference. They are running out of places to house them.

The new arrivals are having a disturbing affect on Maltese politics. While we were there, a new far-right party, the Alleanza Nazionali Republikana, staged the first anti-immigrant rally.

We asked if we could look round the closed detention centres and were told that was not possible. When we approached the perimeter fence of one of them, we were angrily waved away. The conditions looked rudimentary, with a shortage of shelter and washing facilities.

For eyewitness accounts of the centres, we spoke to some detainees who had been released. Hundreds of Africans - Somalis, Liberians, Sudanese and others - are living in the community in Malta. They are the ones who have been given the right to remain on humanitarian grounds.


They are grateful for the help the Maltese have given them, but they say the conditions in the detention centres are very harsh.

They also say something very unusual for immigrants. They all want to leave.

They came to Malta by mistake. They were crossing the Mediterranean between Libya and Italy. Thousands make the journey each year in tiny boats. Many die, but some end up in Malta after running out of fuel, or losing their way.

They have to claim asylum in Malta to avoid being sent home, and then they are stuck. Under EU rules, they have to stay in the country in which they first arrived.

"It's like a trap," said Warsame Ali Garare, a well-educated Somali in his 20s. "You can't continue, you can't go back, and the Maltese don't want you here. The dream is to leave Malta. Everybody wants to leave."

It is a kind of perverse reversal of the American immigrants'

Anonymous said…
After reading this powerful article some humanitarian rights came up to my mind. The fact that these are halted from going to Italy, we are like taking their freedom...which is a human right. We are not letting them do their choice. They don't want to come to Malta and we don't want them! So there is one way to stop all this. We have a lot of powerboats which help in this illegal immigration story. Why the government does not use these criminal people who owns a powerboat and instead of asking the AFM to go and get the illegal immigrants on shore, sends these powerboats so as to take the immigrants directly to Italy. The powerboat owners who are involved in illegal traffic of people, have good connections with the Mafia, and so, with the Italian Government Authorities, and I am sure that they find a way to handle this. The Government of Malta then will pay the powerboat criminals...and it will still be worth to do it. I know that this sound funny, but it is a concrete way how Malta can tackle the illegal immigration problem!!
1:27 AM PDT