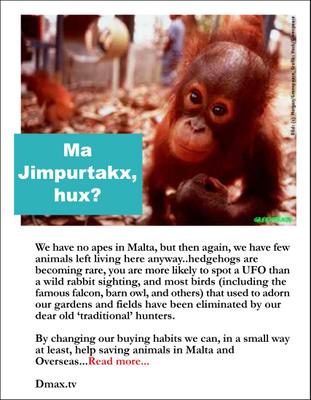 We are all culprits

The UK alone imports nearly a million tonnes of palm oil a year for use in such products, but campaigners say plantations for it destroy rainforests.

Friends of the Earth and international ape conservation groups warn in a report that 90% of the animals' habitat in South East Asia has been wiped out.

Their research claims the apes could become extinct within 12 years.

The groups claim British supermarkets do not know where their palm oil is produced.

They are calling on the government to give company directors a legal duty to minimise their environmental impacts.

Friends of the Earth palm oil campaigner Ed Matthew accused the government of "failing to clean up its own backyard".

He said: "Over 100 UK companies and every single British supermarket is helping fuel the obliteration of orang-utan habitat."

The report, the Oil for Ape Scandal, said palm oil plantations have now become the primary cause of the orang-utans' decline in Malaysia and Indonesia.

Some experts estimated 5,000 orang-utans perished as a result every year.

The research claimed at least 84% of UK companies failed to take effective action to ensure they do not buy palm oil from destructive sources.

Ian Redmond, chairman of the Ape Alliance, said if the government failed to act, "it is we who will have to explain to our children that the orang-utan became extinct because of corporate greed and a lack of political will".