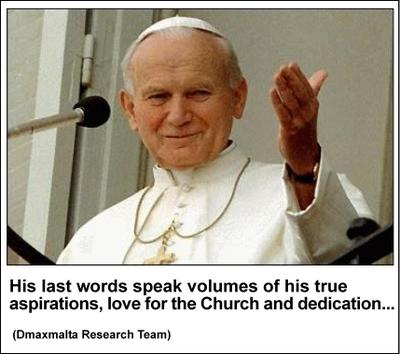 Most Christians look at the holy figure of Pope John Paul rightly as a saintly and deeply inspirational. But its not only Christians but people from all faiths respected this larger-than-life personality, then and even now that he passed away...

Us Maltese have been lucky to have him twice amongst us. Both occasions saw ecstatic crowds flocking the main roads and public places as he passed by or made his speeches...

Now the Vatican has made some interesting revelations that should further boost the former Pontiff's golden chances for fast-forward 'official' sainthood. Read on...

Pope John Paul II's last words before his death were "let me go to the house of the Father", according to documents released by the Vatican.
His words were spoken in his native Polish to aides hours before he died last April.

They are preserved in a new 220-page volume which chronicles the last two months of the late pontiff's life.

It is the first time the Vatican has published such a detailed account of any pope's final moments.

Correspondents say the report is an unprecedented move, as the death of a pope has always been surrounded by secrecy.

The book is to go on sale shortly as a supplement to the Vatican's official journal, Acta Apostolicae Sedis.

It has entries in chronological order, starting in 31 January, the day the Holy See announced the pope's audiences were being suspended due to illness.

Doctors have said some of those symptoms were consequences of the progression of Parkinson's disease, which the 84-year-old pontiff suffered from for years.

In the days leading up to his death, another entry describes the pope feeling a "sudden chill and violent shaking" during Mass. His temperature quickly rose to nearly 40C.

According to the Vatican account, the pope uttered his final words at 1530 on 2 April. "A little before 7pm, he went into a coma," it said.

"According to a Polish tradition, a small, lit candle illuminated the twilight of the room, where the Pope was expiring."

The Vatican announced John Paul's time of death as 2137.