US backed Democracy: The Arabic Style 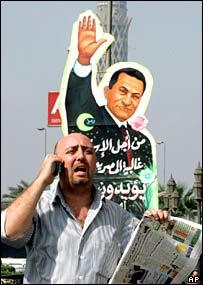 When will Europe stand up and be Counted?

Imagine this: A developing country that has never really tasted democracy finally gets its first chance to do so, but guess what: No monitors (i.e. independent observers sent by international organisations to ensure fairness at all times) are allowed.

Us Maltese are truly a calm lot. Here we are, the southernmost European Nation sitting pretty surrounded by a group of dictatorships situated in our south, literally, most within a few hundred miles far away.

What are we doing about this unfair political and economical reality? How can our many political organisations, social movements, the church and other non government organisations - if not the government itself - do nothing to break this status quo? Not even a comment. How can we tolerate this abuse of human rights on our door steps?

Instead of complaining about the many illegal immigrants coming from these countries, and the many more working in our midst, we should stand up and speak for our poor southern neighbours that are being badly governed by known, corrupt politicians...from Morocco to Egypt, from Syria up to Lebanon and Turkey. These countries can be potentially wealthy, but years of post colonial political mess has left them in dire straights.

Who is speaking for those political prisoners held in Egypt and Syria? Who is complaining against torture in Libya and Egypt? Against the police and army violence in Algeria? How is speaking against political freedom in Tunisia? Who in Malta is discussing the lack of press freedom across all of the Magreb? Who is investigating the growing threats of extreme Islamic groups in North Africa, and also (as a result of our growing number of north African immigrants) in Malta?

Or are we just conveniently happy with the current state, as long as there might be a trickle of economic gain? Does it all boil down to not willing irritate our 'good neighbours'? Is it some sort of diplomatic way of not disturbing the status quo?

Our Prophecy: Mubarak will win his Elections...
(The following is an article partly taken from www.bbcnew.com. Dmax additions are in Italics)

President Mubarak is widely expected to win the election. And who wouldn't? He has a grip on all national media, controls the army and police, has the backing of the USA and has for years persecuted his political adversaries. I guess you don’t have to be an experienced Middle Eastern political analyst to anticipate the electoral result.

Egypt's electoral commission says it will not allow independent groups to monitor Wednesday's presidential election, defying a court ruling. The commission said only supervisors, candidates and their representatives would be allowed in polling stations.

The decision has fuelled fears of vote rigging in the country's first multi-candidate presidential poll.

Mr Mubarak, who has been in power for 24 years, is running for another six-year term against eight other candidates.

On Saturday, the Egyptian judiciary overruled a ban by the government-appointed commission prohibiting local non-governmental organisations (NGOs) from monitoring the poll.

But the electoral commission chief, Osama Attawiyah, told the BBC that the ban would remain in force.

He also said the commission would consider invalid a court decision to exclude one of the presidential candidates.

International monitors are not being allowed to observe the elections either, giving rise to fears the election process will not be transparent.

President Mubarak, meanwhile, is due to round off his campaign with a huge rally in Cairo on Sunday.

The BBC's Arab affairs analyst Magdi Abdelhadi in Cairo says although most Egyptians believe this is an election with a foregone conclusion, 18 days of campaigning have created a lively debate about the country's many social and economic ills.

As a result, for the first time in many years, public attention has focused on domestic problems instead of the usual geo-political conflicts, such as the Arab-Israeli disputes or the violence in Iraq, our analyst says.

He says unemployment, corruption and poor public services are among the many issues that Mr Mubarak has had to defend his record on.

Mr Mubarak's well-choreographed campaign emphasised his experience and the stability he has brought to Egypt in a turbulent region.

His rivals promised a more radical constitutional reform than the one under which Egypt is having its first contested presidential election.