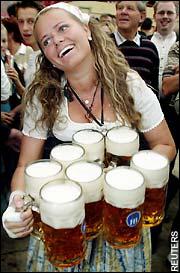 Bavarians are hot under the collar over an EU directive that will force their barmaids to cover up, supposedly to protect them from the sun.
Brewery owners, politicians and most of the women themselves have condemned the legislation as absurd, claiming the "tan ban", as it has been nicknamed, will destroy a centuries-old tradition.

Bavarian barmaids typically dress in a costume known as a "dirndl", a dress and apron with a tight, low-cut top whose figure-hugging effect is enhanced by a short white blouse.
Under the EU's Optical Radiation Directive, employers of staff who work outdoors, including those in Bavaria's beer gardens, must ensure they cover up against the risk of sunburn.
Bavarian bar keepers have been told that the dirndl, generally rather revealing, will have to be replaced as it offers no protection against what the directive calls "natural sources of radiation", meaning sunlight.
Employers now face heavy fines if they fail to protect their workers from the threat of sunburn or skin cancer.
"This is European law-making at its most pedantic," said Munich's mayor, Christian Ude. "A waitress is no longer allowed to wander round a beer garden with a plunging neckline. I would not want to enter a beer garden under these conditions."
A spokesman for the Bavarian Hotel and Restaurant Union said: "I have spoken to lots of waitresses and none of them have told me that sunburn in the décolleté area has ever been a problem."
Organisers of the world's biggest beer festival, Munich's Oktoberfest, which habitually attracts more than six million visitors a year, were particularly angry at the proposed ban. "This is an attack on the traditions of a region," said a spokesman.
The new legislation, which is due to be voted on in the European parliament next month, was defended by Wolfgang Kreissl-Dörfer, a Bavarian MEP. He said: "Sun rays have become more aggressive and there has been a huge increase in the amount of skin cancer."
The directive was initially accused of outlawing bare-chested British builders.
But Britain opted out of signing it, arguing that it was up to employees and employers to use their common sense to guard against the sun.

Haze said…
Try suncream?
At the end of the day it is up to the barmaid's discretion of what they want to wear.
8:30 AM PDT