On splitting the inner atom 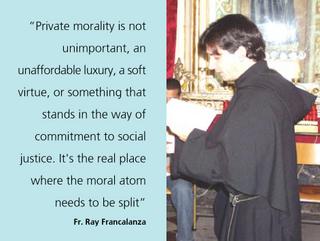 I wish to thank Fr. Ray for his comments...

Ray, I saw the abortion/immigrants piece you sent this morning. Thanks. Your questions are valid and since you’ve asked for some comments…well…here are mine…even though I prefer seeing the issue in a much wider context.

Sometimes I have this funny feeling that our vigilance has been one-sided. Our way of life (and thinking) here in Malta has been healthily vigiliant about sexual morality and what it protects (marriage, family life, emotional stability, social order, personal integrity, proper transparency, the capacity for trust) without, at the same time, being qually (or at all) solitious about the other half of the ‘gospel’, justice, true dignity…. It seems we are too selective in our morality, able to compartmentalise, and able to feel comfortable with neglecting important parts of the gospel because of our passion for one area of it.

We can never be challenged too strongly with regards these issues. A key, non-negotiable, component of the gospel (not just priestly comments) is precisely the summons to reach/save the unborn, to the excluded, to those whom society deems expendable.

The huge, global issues of justice should pre-occupy us. The world is not working very well. The majority of people still live in hunger, millions are dying of AIDS, countless lives are torn apart by war and oppression, and we are still, as a planet, a long ways from dealing properly with racism, sexism, abortion..as you pointed out, and the integrity of physical creation. These are major moral issues and we may not escape into a private world and simply ignore them.

However, precisely because they are so mammoth and important, we can get the impression that the other moral issues we have to deal with, issues of private morality, are not as urgent. It's all too easy to conclude that, given the mega-problems of our world, it doesn't matter much how we live in the deeper recesses of our private worlds, as long as we are doing correct battle on the big front.

Our private, little moral concerns can look pretty petty when weighed against the problems of the world as a whole. Do we really believe that God cares much whether or not we say our morning prayers, gossip about a colleague, reconcile with someone over a petty dispute, or keep our sexual lives fully in line with the biblical ideal? Does God really care about these things?

Yes. God cares because we care. Large, global issues notwithstanding, issues of personal integrity are generally what make or break our happiness, not to mention our character and our intimate relationships. In the end, they aren't petty concerns at all. They shape the big things. Social morality is simply a reflection of private morality. What we see in the global picture is simply a magnification of the human heart.

When ego, greed, lust, and selfishness are not dealt with inside the private recesses of the heart, it's naive to think that they will be dealt with at a social, global level. How are we to build a just, loving world, if we cannot, first of all, tame selfishness inside us? There can be no moral transparency at a global level when we are hiding private secrets. The global simply mirrors the private. The failure to recognize this is, to my mind, the biggest single factor working against social justice groups. It is also a dangerous naivete.

Social action (and I insist…not just debate) that does not have private morality as its base is not spirituality, but simply political action, power doing battle with power, nothing more. It is successful or non-successful only on the principle of "might is right." The kingdom of God doesn't work that way. It works by conversion and real conversion is an eminently personal act. Some weeks ago I came across Carlos Castanedo, a Native American mystic, who writes: "I come from Latin America where intellectuals are always talking about political and social revolution and where a lot of bombs are being thrown. But nothing has changed much. It takes little daring to bomb a building, but in order to stop being jealous or to come to internal silence, you have to remake yourself. This is where real reform begins."

Thomas Merton - my personal guru - frequently makes the same point. During the 1960s, when so many intellectuals were involved in various social struggles, Merton was tucked away in a monastery, far (it would seem) from the real battle-fronts. Stung by outside criticism of his monastic seclusion, he admitted that to most outsiders it "must seem like small potatoes" to be engaged mainly in a war against one's private demons. However, he still believed that he was fighting the real battle, that of changing hearts. When you change a heart, he says, you have helped bring about some permanent structural, moral change on this planet. Everything else is simply one power attempting to displace another.

Private morality and all that comes with it - private prayer and the attempt to be honest and transparent in even the smallest and most secret of things - is the core from which all morality takes its root.

Jan Walgrave, commenting on the social importance of mysticism, suggests: "You can generate more energy by splitting a single atom than you can by harnessing all the forces of water and wind on earth. That is precisely what Jesus, Buddha, and Mohammed did. They split the inner atom of love. Great energy flowed out." John of the Cross, in teaching about the vital importance of honesty in small things, says: "It makes no difference whether a bird is tied down by a heavy rope or by the slenderest of cords, it can't fly in either case."

Private morality is not unimportant, an unaffordable luxury, a soft virtue, or something that stands in the way of commitment to social justice. It's the real place where the moral atom needs to be split.

This is all I think…part of my credo and perhaps a new song!

your friend : the one with the clerical collar and blue jeans