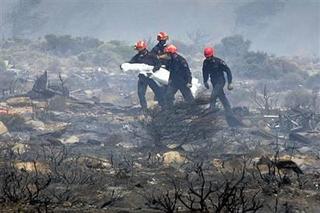 MSNBC News Services
Updated: 9:10 a.m. ET Aug. 15, 2005
GRAMMATIKO, Greece - Most of the bodies recovered from the Cypriot plane that crashed into a mountain near Athens with 121 people on board were “frozen solid,” a Greek Defense Ministry source said on Monday.

“Autopsy on passengers so far shows the bodies were frozen solid, including some whose skin was charred by flames from the crash,” the source, with access to the investigation, told Reuters.

Early indications suggest the 115 passengers and six crew were dead or unconscious when the Helios Airways Boeing 737 plunged to earth on Sunday. There were no survivors.