Should we Thank God for Hunters? 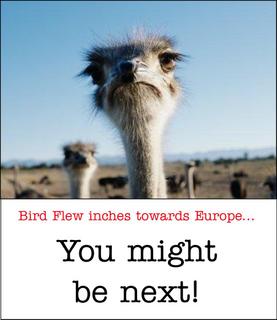 Birds are the carrier of this sickness...So for once Malta's hunters might have found a purpose...if not their likely end...In the absence of an antidote, at least we can always shoot them down hux... What do you think? : )

Russia, which has been striving to stop the spread of deadly bird flu across its territory, said an outbreak in Chelyabinsk was dangerous to humans. The H5N1 strain of bird flu is behind the outbreak in Chelyabinsk, a city in the Ural mountains, the Emergencies Ministry said in a statement, adding that 497 birds had died over the past 24 hours. The strain is the same one that has killed dozens of people in Asia and many millions of poultry.