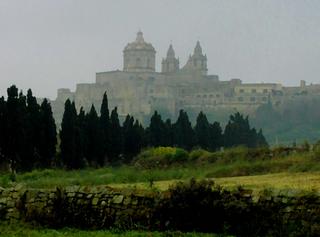 Start the car every morning to work, off I go. From Mellieha centre to Selmun its plain sailing.

Till Xemxija is also fine, apart from the camouflaged troupe of stocky, young wardens down the Selmun hills, amongst the Carob tress, randomly pin pointing and halting drivers on their way to work, adding up to their personal record of hapless, deserving victims.

Xemxija hill is Cancu’s drive, with its photo finish sensation. After its initial furore this speed camera has apparently, softened its zeal and precision, or rather, I suspect its tampered with as I have often observed drivers speeding at over 55km/h up or so down this road without the expected flash. Is its still functioning?

I slow down my car, trying to keep the 45km/hr limit. One well deserved speeding fine was fair enough.

Down round the bent that takes you up to the St. Paul’s Bay roundabout you drive by a bill board showing an elderly couple driving with the underlining phrase ‘Toroq Godda Ghalik’ meaning ‘new roads for you’. Further up the same road you come across more of the same posters promoting the EU funded road reconstruction program.

Well positioned bill boards indeed. This St. Paul’s Bay by-pass is a unique stretch of road for more than one reason: It offers a lovely view of the picturesque bay and surrounding country side, its one of the few remaining unobstructed stretches of road offering over 100 meters of uninterrupted bliss (a rarity for Malta), and well, its probably one of the most dangerous and intrepid stretches of tarmac-cum-asphalt-cum-clay-cum-rubble-cum-cement-road in the north of the island.

Where were we? Don’t defocus! Concentrate. You literally need to zigzag your way round here. There is a part, just up the hill from Xemxija where the road literally fell some 5 years ago or so in one of our winter drizzles. Since then its just remained there, a souvenir of times gone by, a deviation sidelined by concrete blocks that are barely visible if you are a first timer on this stretch or road. It turns out to be a two lane road bottle necked all-of-a-sudden into one lane, without any sign to tell ‘give way’ or ‘watch it’...Its simply left for you to discover, hopefully not by accident as some inexperienced drivers - trying their best to get to work on time – have lived to tell.

No matter how new your car is. No matter how raunchy its suspensions looked on its brochure or TV spots, its difficult to get its bottom part spared in one of the slopes and crevices on then way, beyond the deviation I just mentioned, some 50 meters up.

And we are still on the same by pass, that’s barely 2 km long.

Do not try speeding over here unless you are either being chased by bandits, or else you are driving a Hummer SUV. It’s a suicide. Check with the QAWRA Police Station for the statistics of accidents down this by pass. I am afraid it will be a shocking revelation.


You drive down to the Burmarrad roundabout. Another booby-trap-zone. Beware. It’s a tempting piece of your journey, a strange feeling of liberation grips you when you reach this spot, and after the previous ordeal your urging desire for speed may overcome logic. Bad.

Next time you are driving at this point look toward the circumference wall of the roundabout as you arrive down this hill, on your right. Particularly, if it has been raining before. I bet you there would either be a crashed car logged in the side of the roundabout, or else, you can see the remaining traces of some recent skid and crash on this site. It has become traditional spot. A combination of slippery tarmac at the right angular slope effect sends any ABS brake expert back to the drawing board. Government works people must have been rebuilding this roundabout circumference wall as a routine part of their duty for years. Strange how they never bothered installing crash barrier, but.