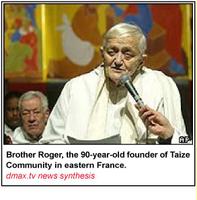 Brother Roger is known by thousands of young Christians...I went there 4 years ago with a small group of Maltese youths, and the experience was very deep and touching. Seeing all those young people of various religions mingle altogther in prayers, songs and meditation was a first in my life...

The Taize religious community in eastern France, says its 90-year-old founder has died after a knife attack during a prayer service.

Police detained a Romanian woman after the attack on Swiss-born Roger Schutz, who was known as Brother Roger.

Around 2,500 young people were at the Reconciliation church in Burgundy at the time of the attack.

Brother Roger founded the community during World War II when he provided refuge to people of all religions.

Brother Alois, 51, who Brother Roger had nominated to be his successor, was returning from the World Youth Day jamboree in Cologne to take his place, a community spokesman said.

The Taize community unites members of several Christian denominations from some 30 countries and attracts tens of thousands of young people each year for prayers and meditation.

Some of those at evening prayers on Tuesday are reported to have overpowered the woman after she stabbed Brother Roger.

"We are in shock; there is a lot of confusion here; nobody understands what happened," a nun told AFP.

German Prelate Heiner Koch said in a statement: "All the participants in World Youth Day are praying for this great figure. We express our deep compassion to the Taize community."

President of the French Bishops' Conference, Archbishop of Bordeaux Jean-Pierre Ricard, has written to the Taize community expressing his "deep grief" after the murder of "this great figure of a researcher and witness of God, impassioned by unity among Christians and reconciliation".