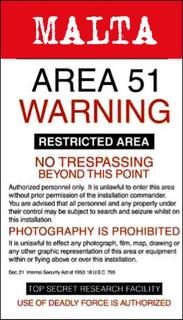 Freedom of expression in Malta is fine unless you challenge the Status Quo.

Abortion is a "no-go!" area in Maltese discussions...We all assume that just because more than 75% of the local population is supposedly practicing Catholicism, and since abortion is illegal on the Island - then it does not take place...

I believe that we should debate the issue with a more open mind, meaning: lets have people for and against debating it.

I have had enough of hearing just 'my side' of the argument saying “it’s murder", 'it’s bad", 'it’s a sin'. It’s good to be sure of yourself, but for the sake of the argument, in respect of our pluralistic political scenario, it’s healthy to have an open debate that tackles all sides of the argument however thorny it may be. After all aren’t we a mature lot? Isn't Malta a bastion that defends the citizen's right of 'freedom of expression'?... This is what our Europe is about, no?

I came across the following article on the BBC News Site (http://news.bbc.co.uk/2/hi/health/4180592.stm) that is particularly interesting as it approaches the issue of physical pain by the fetus ... It is a hard topic to debate and it may sound controversial particularly in Malta where debates of this nature are traditionally reserved to priests, lawyers and doctors. As if ordinary women, men and other less 'intellectually endowed' mortals have no right to have their say...

Many believe close to a hundred illegal Maltese abortions are held abroad (in nearby Sicily or in the UK), and potentially others may be taking place in Malta itself. We can never really know exactly how many but surely Abortion is Malta’s Area 51. Officially it does not exist. In reality: Only God Knows!

The study looked at what stage of pregnancy a foetus could feel pain
Foetuses cannot feel pain until the last few weeks of a pregnancy, a review of medical evidence has concluded.
The paper, in the Journal of the American Medical Association, was prompted by proposed federal legislation in the US.

It would require doctors to tell women having an abortion from the 20th week of pregnancy that the foetus felt pain.

But the University of California team said foetuses would only have that capacity at 29 to 30 weeks gestation.

A full-term pregnancy lasts around 40 weeks.

The basic neuroanatomy must be there, and has to function, for pain to be experienced

The researchers say there is only limited data available on this issue.

But, writing in JAMA, they say pain requires the conscious recognition of an unpleasant stimulus.

This cannot happen until certain brain structures connecting the thalamus and the cerebral cortex develop during the third trimester of pregnancy.

These connections are not usually apparent until the 23rd week of pregnancy and may not begin to be made until the 30th week.

They add: "Because pain perception does not function before the third trimester, discussions of foetal pain for abortions performed before the end of the second trimester should be non-compulsory.

"Foetal anaesthesia or analgesia [pain relief] should not be recommended or routinely offered for abortion because current experimental techniques provide unknown foetal benefit and may increase risks for the woman."

But the team called for further research into the issue.

A UK expert said the JAMA conclusions were in line with what was already known about foetal pain.

Charles Rodeck, professor of foetal medicine at University College London Hospital and spokesman for the Royal College of Obstetricians and Gynaecologists, said that in all abortions carried out in the UK beyond 22 weeks, the foetus is either injected with something which stops its heart, or the mother - and therefore the foetus - is under a general anaesthetic.

He added: "The basic neuroanatomy must be there, and has to function, for pain to be experienced."

But Julia Millington of the UK's Pro Life Alliance said: "It is not the ability of the victim to feel pain that makes killing objectionable but rather the violation of that individual's most basic human right, the right to life."

Moments of Inner Peace said…
Good article. I fully agree with Julia Millington when she says "It is not the ability of the victim to feel pain that makes killing objectionable but rather the violation of that individual's most basic human right, the right to life."

.... So if I am given a pain killer or general anaesthetic does that give anyone the RIGHT to kill me??????

Travis said…
This seems to be a very sensitive topic in Malta, as it is in the U.S. and other countries were abortion is legal. As a U.S. citizen who believes that the mother (and in some cases the father) has the right to choose whether or not to continue an unwanted pregnancy, it is sometimes hard to draw the line as to when the decision to terminate a pregnancy comes too late. I would hope that the vast majority of abortions in the U.S. occur within the first three months, but I’m certain that late-term abortions take place as well. In the study recently published by JAMA, researchers are confirming that terminating a pregnancy at five-and-a-half months is painful for the unborn child, which has developed most of life’s necessities, as well as for the mother. Pro-choice advocates are unlikely to dispute that abortions after this five-and-a-half month milestone should be performed unless extenuating circumstances are present, such as serious birth defects or a mother’s inability to carry the child to term for health reasons.

It is interesting to note how the legalization of abortion in the 1970s has changed America today. I’ve recently been reading Freakonomics by social economist Steven Levitt and he points out an interesting correlation between the legalization of abortion and the reduction of crime in America that began to appear 16 years later. He came to the conclusion that this trend was due to the reduction of the birth rate of those individuals with the highest likelihood of becoming criminals (those born to poor or single-parent households in inner-city neighborhoods). While there are probably other issues that may account for this downward trend, it does seem to hold some credence.

While many people don’t agree with my decision to support the right to terminate an unwanted pregnancy, I believe the alternative is worse. Children born into families where they are either neglected or abused by parents who do not want them grow up harboring a negative few of the world and will likely make the same poor decisions their parents made. Further, if they aren’t able to find value in their own lives and the lives of those around them what is to prevent them from becoming criminals. It’s easy to see that this is a vicious cycle that abortion may help to quell. By allowing these abortions to be performed by doctors licensed by a medical certification board that can ensure its safety, women are not forced to find underground abortion practitioners that may or may not care about the physical ramifications the mother may face as a result of the procedure.

I apologize for posting such a lengthy comment about this topic. This is an issue that definitely deserves a lengthy debate and I applaud you for bringing the issue of abortion in Malta to light on your blog.
7:53 PM PDT